through the ivory gate

I had this dream where I was a child again. With some other children, I was running away from this group of soldiers who were chasing us- of course the soldiers were nazis - in an enormous house with endless corridors and staircases. Finally the soldiers had us cornered in an attic room, there was no escape. But then another group of soldiers, led by this huge bearlike creature, appeared and killed all the nazis.
The creature approached us, kneeled down and took of its mask. It was a little boy inside a polar bear suit. His face glowed like the sun and the whole room was suddenly filled with warm, bright light.
"Now you are safe" the boy said.

There was a really weird atmosphere surrounding the boy, something that I cannot explain with words or pictures. But I had to draw the boy anyway, so here it is: 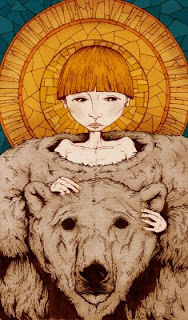