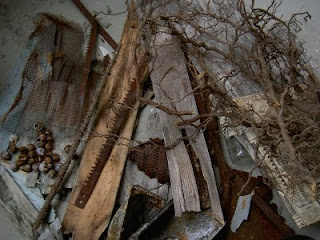 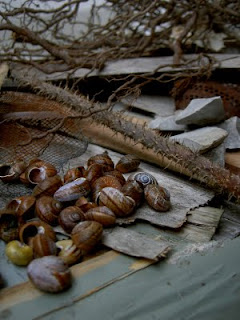 A pile of junk which I hauled today from the forest? Oh no, far from it. It's crafting materials for collages. It will all turn into something like this: 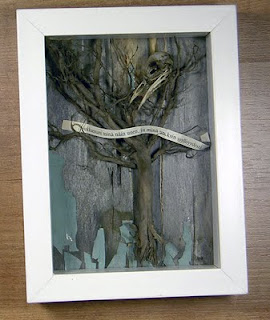 Above is one of three collages I made last year for a group exhibition. Making the collages was so much fun and inspiring that I thought I'd give it another go. I really like the process how the collage comes together. When I'm drawing things, I first see the image in my head and then I create every detail, I can shape everything just like I want them to be. But with collages it goes differently. I wander around looking for interesting things, stones, pieces of wood, rusted metal, any object that will speak to me in a certain way. Somewhere in these objects is a story, which I have to find and put together, and I can only shape things to a certain point. I have to work with the shapes the objects have, I cannot make them to be anything I want like when I'm drawing. So it's a nice change to how I usually work.
Posted by Markku at 10:45 PM No comments:

One of today's drawings: rocks and roots and astronauts. 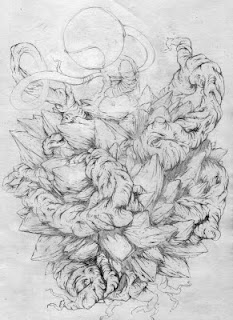 I have to say it feels damn good to be drawing again, I'm enjoying every line. Lots of new stuff coming up, if I only could concentrate a bit more, I'm on that stage where I'm jumping back and forth between drawings all the time, starting a new one and after fifteen minutes going back to what I was drawing before that and so on.
Posted by Markku at 2:13 AM No comments:

Trying to remember how to hold a pencil

Ok, here we go. It's been ages since I last drew anything, let's see if I still remember how this goes. 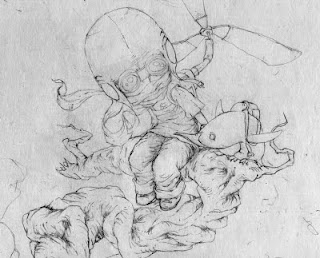 The life after deadlines

Yes, I'm still alive in case you were wondering. This far the whole year has just been too full of commissioned jobs and other projects so I haven't got much time to do draw anything for myself and this blog has suffered from a deathlike silence. Lots of great things has happened in a short time, yesterday I made my first musical performance on an open air stage, being a part of an experimental electronic music and video art performance named Boys on Toys: The Language of Electric Waste. The show was a part of Kymenlaakso 2011 happening at Turku. I hope to get some video from the show soon.

I feel kind of exhausted at the moment, but the things that have kept me busy for so long are now finished and the pages on my calender are almost empty for the coming weeks and even beyond that. I had almost forgot how it feels not having a deadline after deadline lurking in every spread of my calender. So after some holiday time, I'm going to concentrate on doing my own art projects at least for a year, that means a lot of drawing amongst other things. Also, this blog will wake up from its slumber.
Posted by Markku at 1:07 PM 2 comments: