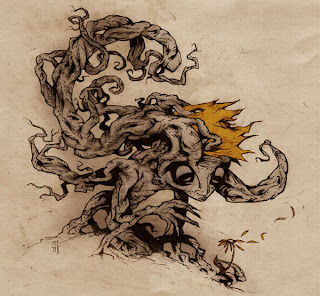 I've been mostly drawing my graphic novel, it's finally showing some progress. I'll post something when I do some inking, the pencilled pages aren't much to show.
Posted by Markku at 2:03 PM

this reminds me Daphne, but in your draw I see only roots, leaf less. but the same sense of dramatism.

in this link:
http://digilander.libero.it/debibliotheca/Arte/bernini/bernini_apollo_and_daphne.jpg
is a picture of the statue of Bernini, that I like very much.
do you like Bernini?

I can't say I like Bernini, but it's also too strong if I say I don't like him.
Let's say that I don't have a strong opinion in either way. Sure, his work impresses me, but liking them is a another thing. It's a very different kind of art that sets me on fire.

Well, your drawing doesn't have leafs, but on the other hand, Bernini didn't do the leafs on Daphne himself. He got bored, so he made his assistant do all the leafs. So maybe you too need an assistant do draw you more leafs? :D

Great idea! Maybe that how I could actually finish more stuff, and what's best, with more leafs! And besides, all great artists had assistants, I want one too. So what are you doing next week?

No wait, damn, first I have to become a great artist. So let me get back to you...yeah, next week? ;)